The Red-Rose City of Petra, An Archaeological Tour 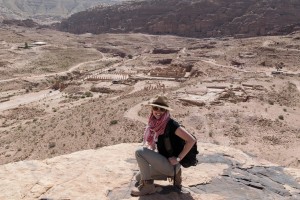 Petra, the capital of the ancient Nabataean kingdom, is best known for its remarkable tombs, carved into the sandstone cliff-faces in and around the city. But ancient Petra was so much more than just a kingdom of the dead. In the late first century BCE, it was becoming a thriving economic hub, a pilgrimage site, an agricultural center, and the seat of royal power. Rome eventually annexed Nabataea, which shifted the nature of the city. By the Early Byzantine period, churches dominated the cityscape. This lecture will digitally escort you through the Nabataean city from the 1st century BCE to the 6th century. We will explore civic and religious architecture, the lives of the ancient inhabitants, and Petra’s changing religious significance, all with an eye towards the ever-evolving politics in the ancient Mediterranean.

Sarah Wenner is a Ph.D. candidate in Classical Archaeology at the University of Cincinnati. She has worked in Petra since 2013 on several projects, including the Petra Garden and Pool Complex and the Petra North Ridge Project. She also excavated and researched in Aqaba, Udhruh, Rome, Pompeii, and the US, and is the Head of Excavation of a new project at Tharros, Sardinia. In addition to her dissertation research on Roman cities, Sarah works as a Mellon Curatorial Fellow with the Cincinnati Art Museum on the reinstallation of the museum’s Ancient Middle East Gallery.