The Chichimec in the Aztec and Spanish Imagination 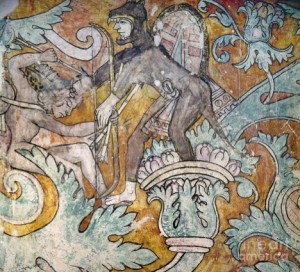 Before and after western conquest, the sophisticated Nahua city-dwellers (Aztecs) called the nomadic and semi-nomadic people of central Mexico “Chichimec,” or the equivalent of “barbarians,” for their different apparel, customs, and religion. This presentation will focus on the visual representation of the Chichimec people by the Aztec and the Spanish empires. As a marginalized community who inhabited the northern extremities of the Aztec Empire, the Chichimec people represented a barrier for expansion and domination. Using codices produced before and shortly after the Conquest, we will investigate how the Aztec presented the Chichimec as the Other. Spanish colonization of Mexico was also met with resistance by these same people, who were transformed in the European mind from a barbaric tribe to Medieval concepts of fantastical beasts, especially those associated with satanic forces. By investigating archival documentation on the Chichimec people, we can construct how their identity and history has been distorted by imperialist agendas.

Daniela Gutiérrez is an Art History instructor at Cypress College whose work focuses primarily on the constructs of identity in colonial Mexico. Specifically, her research investigates the representation of race as seen through casta paintings produced in the eighteenth century. Her interests include structures of power and historical pseudoscience approaches to race and their influence on Mexican identity. Currently, she is a Cultural Studies doctoral student whose focus will continue to investigate the relationship between power, identity, and representation.