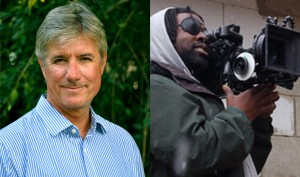 NOTE: We recommend viewing djones’ 9 minute film 631 prior to the discussion. It is available free here.

This conversation pairs Atlanta-based documentary filmmaker djones in dialogue with Dr. James E. Young, Distinguished Professor Emeritus and Founding Director of the Institute for Holocaust, Genocide, and Memory Studies at the University of Massachusetts Amherst. They will discuss djones’ film 631, 2008, which documents his family’s stories through their ownership and struggles to maintain a multigenerational home in Youngstown, Ohio. Employing the film’s visual narrative as a lens, the panelists will address the intersections of personal narrative and how these shared private stories inform public socio-cultural discussions and understanding of memory and memorializing events.

Derrick A. Jones (artistically known as djones) is a doctoral student in the School of Film, Media & Theatre at Georgia State University, and co-founder of the “urban nu-sense” collective. He also holds and MFA in film from Ohio University with a focus on independent documentary. His research is focused on blackness as aesthetics with special interests in black process, black Archives, and black feminist thought. At GSU, he is part of the liquid blackness project, a research group studying blackness as aesthetics. His films have featured in several film festivals and special screenings internationally as well as television and gallery spaces. djones has worked professionally in higher education in faculty and staff positions at Bowling Green State University, the University of Akron, and Naropa University. He currently resides in the Atlanta, GA area.

James E. Young is a Distinguished Professor of English and Judaic Studies Emeritus at the University of Massachusetts, Amherst, where he has taught since 1988, and Founding Director of the Institute for Holocaust, Genocide, and Memory Studies at UMass Amherst. Young has authored numerous publications, including Writing and Rewriting the Holocaust (1988), The Texture of Memory (Yale University Press, 1993), At Memory’s Edge: After-images of the Holocaust in Contemporary Art and Architecture (Yale University Press, 2000). Most recently his book The Stages of Memory: Reflections on Memorial Art, Loss, and the Spaces Between (UMass Press, 2016), won the National Council for Public History Book Award for 2017. At present, he is completing an insider’s story of the World Trade Center Memorial, entitled Memory at Ground Zero: A Juror’s Report on the World Trade Center Site Memorial and Museum.