Can We Talk About This? On Antifascism and Art in this Cultural Moment with christy roberts berkowitz and Badly Licked Bear 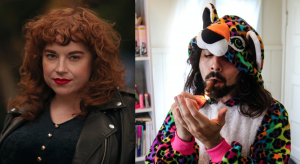 Note: If you’d like to donate to the causes mentioned in the lecture: Auntie Sewing Squad is headed by artist and activist Kristina Wong. Badly coordinates donations from Los Angeles to partners in Navajo Nation, which has the highest rates of COVID-19 in the country. People can donate directly @GiveKristinaWongMoney, or make a tax-deductible donation via this link: https://donorbox.org/auntie-sewing-squad.

The 3d printing work is through #3DPPEArtistNetwork. Folks can donate directly to that effort, which adds additional printers to the network and keeps the supply lines running for those printers, by Venmo-ing @ppe-3d-artist-network. Artist-professors Ed Giardina (Cypress College) and Devon Tsuno (CSUDH) started and coordinate that network. 3D PPE Artist Network has also supplied printers and related equipment to Navajo Nation and several other impacted Native nations.

As a country, we are grappling with how inequalities like the murders of Ahmaud Arbery and George Floyd were committed with such complete disdain and disregard for black life, and with such confidence in complete impunity. But for many, these events were not surprising in the least, but a continuation of a system that values American lives very differently.

Particularly in gallery and museums spaces, and even more so in academic areas, we are obligated to address, and work to dismantle, systems of privilege that allow inequality to proliferate. In this regard, art is uniquely positioned to address structural disparities, and make that work accessible. Join us as we speak to artists about our current political climate– how it affects the arts and how the arts shape it.

Artist, educator, agitator, and emotional laborer, christy roberts berkowitz, composes experiences, images, and objects that attempt to reconcile the intersections of revolution and escapism, expectation and failure, subject and object, community and individualism. A third-generation southern Californian, roberts berkowitz holds Bachelor degrees in philosophy and religion, a BFA in studio art, and an MFA from Claremont Graduate University. She is an associate professor in the Riverside Community College District & at the University of La Verne. roberts berkowitz has organized in/with/at: Freewaves, CURRENT:La, KCHUNG, Glitzer, The California Poppy Collective, Problematic Radio, The Los Angeles Dept. of Cultural Affairs, MOCA Los Angeles, The Getty Museum, The Telfair Museum, The Chrysler Museum, REDCAT, The Hammer Museum, The Los Angeles County Museum of Art, The Orange County Museum of Art, The Los Angeles Municipal Art Gallery, American Jewish University, among many others. roberts berkowitz has written for Art21 Magazine, Citizens of Culture, Undo Magazine, and was one of LA Weekly’s Best of LA People, 2012.

Badly Licked Bear has been an arts administrator, community leader, writer, curator, student, artist, and educator. As an artist, their work has been divided between two poles – a performance practice at the intersection of a disciplined body and Looney Tunes, and an exhibition practice that is concerned with survival in an age of ecological and cultural crisis. Their artistic work has been exhibited or performed at MOCA, Hammer Museum, REDCAT, Human Resources Los Angeles, Machine Project, Cerritos College, The Wignall Museum, and numerous other Southern California venues, as well as less-institutional locales, like the time they opened an illegal bar in the Pacific Ocean for the CURRENT:LA triennial. In their prior career, they were a curator with a focus on nurturing emerging artists, commissioning new works, and social practice projects. In their role as educator, they teach courses ranging from game design/theory to professional practice, with a focus on transforming students into powerful observers and thoughtful tellers of their own stories. Their remix of Watchmen as a critique of the “contemporary art industrial complex” will be released in late 2020, presuming the world hasn’t ended, yet.