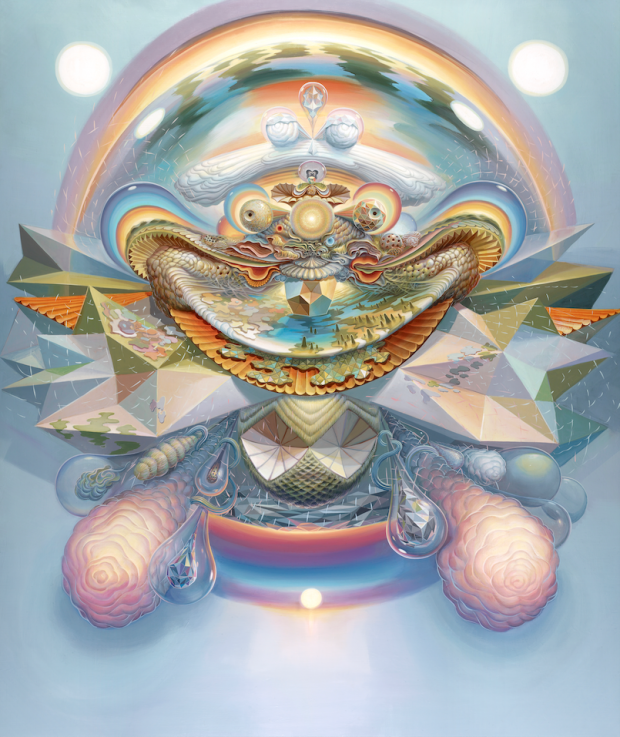 On view in-person: November 12, 2021–February 3, 2022
Illustrated, curatorial essay available here, and in print, contact gallery@callutheran.edu for a copy. Download here.
A lecture recording on the exhibit with Dr. Michael Pearce can be found here.

The Otherworld is an exhibit of visionary paintings by artists who imagine the world as another place, where alternatives to everyday reality are made manifest, and landscapes, animals, and people are transformed. There are a range of paths to this other world – chemical, religious, and imaginative–all are treated with equal respect in the exhibit, which seeks the common ground that lies between psychedelic explorations of the Californian hippy movement, science fiction and fantasy, visions born of the contemporary spiritual imagination, and artistic conceptions of how the world might be re-created. Intrepid explorers of the imagination, a taste of alternative reality, and a generous helping of dreams are the ingredients for a spectacular show that will inspire, puzzle and delight.

The Visionary Art movement began in California in the 1930s, as a spiritual art inspired by young German immigrants who brought with them the ideas of the anti-authoritarian Wandervögel movement. Subsequent ecstatic imagery of the 1960’s back-to-nature movement overlapped with psychedelic art, and brought a counter-cultural quality to it. Because most early visionary artists were untrained outsiders, their work had a somewhat naive aesthetic, but as the genre has matured, its paintings became increasingly sophisticated. Their techniques have evolved from early airbrush work to incorporating the complex finishes of digital art within the works, and the range has expanded to include grisaille painting and old masters’ techniques. The subject matter has expanded, too, influenced by developments in technology and neuroscience, which have added a broad range to the subject matter available to artists working within the genre. Since then, it has developed into a burgeoning field within popular culture.