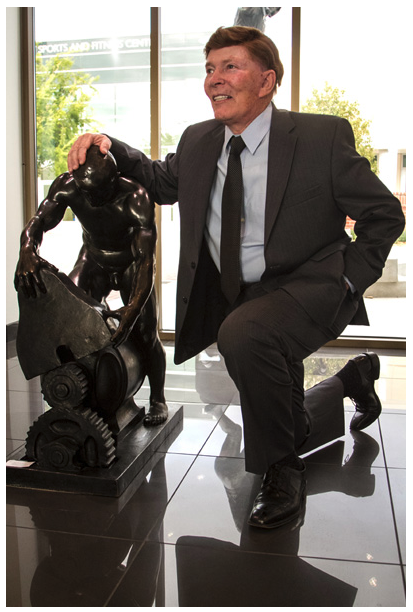 I write to you today with some sad news. William Rolland, whose visionary generosity led us to add his name to our stadium, fine art gallery, and art center, passed away on Sept. 18. He was 87.

Though I had not yet had the pleasure of meeting Bill, I have heard a lot about him and his vested interest in building a legacy at Cal Lutheran. I am grateful for his generosity and in awe of his vision. His gifts for the creation of two game-changing facilities provided Cal Lutheran with a renowned athletic venue and enhanced our reputation as a leader in the visual arts.

I’ve learned through others that Bill and Kay Rolland were introduced to Cal Lutheran by their Westlake Village neighbor Joan Young, who served on the Board of Regents. This introduction sparked an interest in Bill to improve the campus not only for the students but also for the community.

He had a vision for the open space west of the Gilbert Sports and Fitness Center that had been set aside for a future stadium. His initial gift of more than $5 million brought the 16,000-square-foot William Rolland Stadium and William Rolland Gallery of Fine Art to life in 2011. The stadium, complete with its 70-foot clock tower that made Bill proud, is now home to football, soccer, lacrosse, and intramural sports matches, graduation ceremonies, and community events.

In 2015, he pledged another $4 million to help build a new home for our visual arts department. Located just west of the stadium, the distinctive William Rolland Art Center — featuring art studios, art, and multimedia classrooms, offices, computer labs, and a student gallery – opened in 2017.

To recognize Bill’s success as a philanthropist and land developer and to honor his service as a long-time firefighter, Cal Lutheran awarded Bill an honorary doctor of laws degree. In his acceptance speech, he said his “humble beginnings as a child of the Great Depression and his work as a first responder made him aware of the importance of giving back to his community.”

A firefighter for 17 years, he received the City of Los Angeles Fire Department’s Medal of Valor. Following his fire service, he created the William Rolland Firefighters Foundation to benefit the families of firefighters injured or killed in the line of duty and established the William Rolland Firefighters Educational Institute dedicated to fire and life safety education. He also spent more than four decades as a real estate developer in Ventura County and owned properties throughout the country.

In addition to being a developer and a philanthropist, he was a collector of fine art for more than 60 years, owning hundreds of antique bronzes, porcelains, and fine works that he shared with the campus.

At the dedication of Rolland Stadium, Bill explained that it “is only a part of my legacy. I hope the stadium will expand the interest in the programs offered by the university and give it a greater identity. I also hope that the art gallery will offer others a chance to establish a greater appreciation for art and architecture.”

Bill felt that art should be incorporated into all aspects of life. The finishing touch outside the stadium was a bronze football player that Bill co-designed with sculptor David Spellerberg. The player wears No. 32 just as Bill wore when he played football while serving in the U.S. Army.

I hope that over the years, as we enter Rolland Stadium and the Gallery of Fine Art or wander through the light-filled spaces in the WRAC, we think of Bill and his passion for making Cal Lutheran a more distinctive, vibrant place. His legacy is indeed awe-inspiring.

There will be no services. Please keep Kay, his daughters Debbie Rolland and Cindy Newman, and the extended Rolland family in your thoughts and prayers.

In gratitude and in tribute to a legacy,