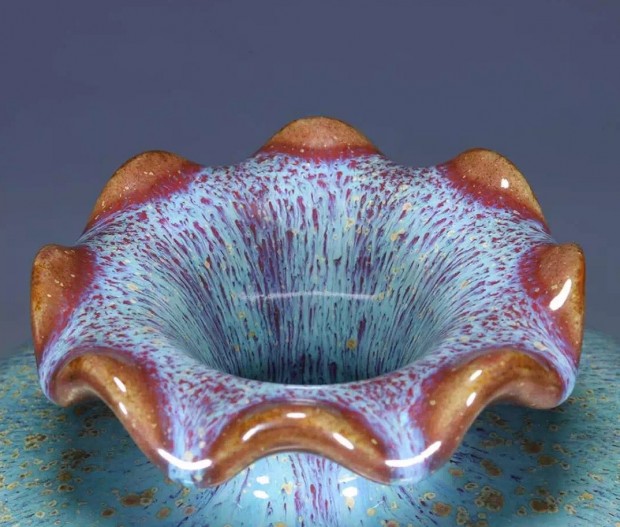 Jun porcelain, one of the Five Great Kilns of the Song Dynasty, is considered a treasure of Chinese ceramic art. Known for its astonishing glazes, it first appeared in the Tang Dynasty (618-907) and prevailed in the Song Dynasty (960-1279). Its origins are mysterious, since there are no known writings about the wares until 1504, though a line of pieces were produced exclusively for the palace court and show up in Imperial paintings. According to legend, every year Emperor Huizong selected only 36 treasures from the imperial kilns as royal articles, with all others destroyed and immediately buried.

Despite being highly valued, the porcelain fell out of use and its methods were seemingly lost. In the 1950s there was an extensive movement to rekindle Jun wares; major studies and excavations of kiln sites took place. Eventually, experts in Yuzhou City were able to resume production of the prized wares using a double-fire-barrier-bed kiln and wood firing techniques. Today, craftsmen still adhere to the traditional production and strict examination standards. All pieces considered to have any “imperfections” are destroyed on site to ensure only the highest quality carries the title, which also leads to extremely low yields even in modern times. The rare ceramic ware is now under government protection as a state-level intangible cultural heritage.

The works in this exhibit were generously loaned by the Song Royal Kiln in China. Curated by Yilin Li.