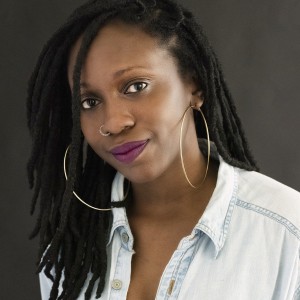 Back by popular demand! Famed LA-based poet Alyesha Wise will be performing and hosting. This event functions like an open mic/slam; any poet is welcome to bring a piece to perform. Sign ups will be on a first come first served basis at the beginning of the event, with audience members judging the performances. Top 3 winners will receive $50, $25, and $15 gift cards respectively. Please keep poems to under 2 minutes to avoid disqualification.

The author of Carnival (NOT A CULT media), Alyesha Wise is a poet, teaching artist & TEDx speaker from Camden, N.J. She currently resides in Los Angeles, Ca and is the co-founder of Spoken Literature Art Movement, an organization providing poetry education and extensive programming for poets. She served as the Hollywood (Da Poetry Lounge) Slam Team head coach for the last two years, co-coaching both teams to final stage at The National Poetry Slam. In addition, she served as the Los Angeles (Get Lit) Youth Slam Team co-coach from 2014-2017. Wise is also a 2-time Women of the World Poetry Slam finalist and has been featured on different platforms and publications such as Huffington Post, Bustle, Afropunk, PBS, POPSUGAR, Buzzfeed, Free Speech TV and more. She has collaborated with the ACLU of Southern California, Brave New Films and additional major platforms, having featured in the Google Interstellar Project, in conjunction with the hit film Interstellar.

Funding for this event was provided by the Cal Lutheran Artists and Speakers Series.